Arrgg! A pirate's life for me! 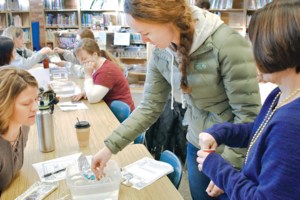 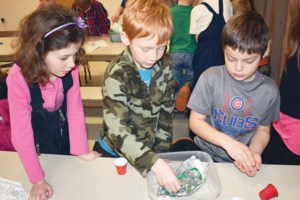 Haines and Brooklyn Elementary teachers learn science project, then take it to their own classes
The challenge: build a pirate ship to transport as many gold doubloons as possible without sinking. The materials: aluminum foil, popsicle sticks, straws, tape, plastic eggs and miniature cups.
The size: no bigger than six inches by six inches.
With these simple instructions in mind, the teachers quickly divide into pairs and start sketching out their designs for a boat. Then comes the construction and test – first each team floats their creation in a container of water, then starts adding doubloons (metal washers) one at a time, keeping count until the vessel sinks to the bottom.
The goal with this project, presented Jan. 13 by Sharon Defrees (high school science teacher) and Nicole Sullivan (middle school science teacher), was to teach other teachers how to do a simple science experiment that they can take back to their own students. Staff from Brooklyn Primary and Haines Elementary attended the training. “Our number one goal with science is to have fun, then kids will want to do science,” Sharon said. The “fun” started with Nicole's rapid-fire pirate jokes, followed by a reading of the book “How I Became a Pirate” by Melinda Long.
After sketching their design, the teachers made a prediction about how many doubloons they thought their ship would hold before sinking. And, Sharon told the teachers, if the design fails the first time, just re-adjust and try again. “In engineering design, you want to adjust over and over,” she said. And on the second try, nearly all the ships — most redesigned — held all the doubloons provided. Sharon and Nicole then handed out cups full of water, to see how much liquid the ships could hold before sinking.
The packet of instructions, which will go along with the lesson for the students, includes art (drawing the designs), writing about observations and how it was redesigned, and math by counting the doubloons and comparing that number to other teams. “One thing we want to do with science is incorporate reading and writing,” Sharon said. Prior to this presentation, Sharon and Nicole developed the science projects that would be appropriate for younger elementary students. This was the first STEM (science, technology, engineering and math) project they brought to the teachers.
In addition to the instruction, the elementary school teachers also left with a kit containing all the necessary materials for the project. “We want to put it in right, so it's meeting the standards,” Sharon said of the science lessons. After the pirate adventure — one ship built by Stephanie Mays and Karen Tannehill held 58 doubloons on the first try — the teachers had time to plan the project for their own classrooms. Then they came back together to learn some more science, this time about light and sound — physics presented in a way to make sense to young students, such as sound experiments with vibrations.
Teachers have been implementing the lesson in class during the past month — at Haines Elementary, kindergarten, first and second grades joined each other to design and test their ships.
Source: Bulldog Pride February 2017