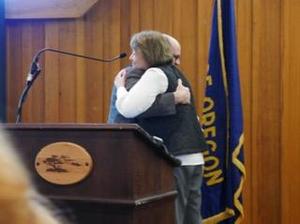 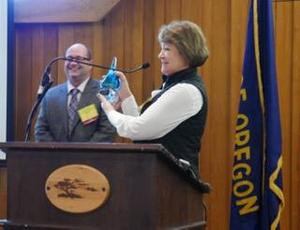 Betty Palmer, assistant superintendent for Baker School District, received an award of excellence from the Oregon Association of Central Office Administrators (OACOA) on Friday during the winter conference of the Confederation of Oregon School Administrators (COSA).

Nominations for this award are submitted to OACOA each fall. A board reads through each submission and selects one recipient.


“Betty was the number one choice of our committee,” said Colin Cameron, COSA deputy executive director.


According to the OACOA website, to be eligible for the award recipients must have completed five years in a supervisory position and be a member of COSA/OACOA. In addition, award-winners “exhibit service and achievement in their education role that is above and beyond that which is expected and exhibit professional development and growth through involvement in professional organizations.” The OACOA board also considers if an applicant's professional accomplishments have contributed significantly to the educational development of students and other staff.


“This honor truly couldn't go to a more deserving leader,” said Katy Collier, Haines School principal. “Betty's dedication to education spans across so many levels - from students to staff to district leadership. Her commitment to the people and programs in this profession is tremendous.”


Palmer served as interim superintendent in 2015. Prior to that, she was the building administrator at Haines Elementary from 2007 to 2009, and then at South Baker Intermediate School from 2009 to 2015.


Her nomination letter details Palmer's creation of Summer Academy. It reads: “Under Betty's direction, students have received increased academic instruction, and our data is showing marked improvement. Betty's strong community relations have been integral to the success of the program. Our community partners provide programming and extra resources to facilitate field trip experiences for students. Betty maintains strong relationships year-round, and as a result, has increased our number of community partners from eight to 22.”


It goes on to say that she recently wrote for – and received – a 21st Century Learning Center Grant that will support Summer Academy for the next five years.


The success of Summer Academy, the nomination reads, inspired Palmer to help develop a half-day Friday program for students who need additional instruction throughout the year.


“Betty laid the foundation for the Friday Academy programming, recruited leadership and teaching staff, and built a culture and appreciation for supplemental Friday education in the community.”


“Betty has been an unwavering support for me as I transitioned into the role of school administrator,” said Phil Anderson, principal at Brooklyn Primary School. “Few possess her experience and knowledge, and I have learned more in the past years from her guidance than I have in all my years of education. I feel honored to have had the opportunity to work with her the past four years. I can’t think of anyone more deserving of this award.”


“At her core,” the nomination reads, “Betty is a teacher. The lessons and experiences she has provided administrators over the past five years have improved the trajectory of our district as a whole.”


Palmer will again be recognized as the award recipient at COSA's summer conference in Seaside this June.